The Study of Mechanisms Underlying Regenerative and Reparative Processes Within Tissues

The ability to control the regenerative and reparatory processes in pathologically altered tissues is increasingly becoming an important focus for many researchers worldwide. In the ordinary course of a pathological process development due to damage in the epithelial mesenchymal tissues, a connective tissue cicatrix is formed (a glial cicatrix, in case the pathology occurs within the neural tissue), which alters the corresponding tissue and either partially or, sometimes, significantly change its function. For example, after a stroke or a brain surgery the formation of glial cicatrix leads to a poor conductivity or even the complete loss of neural signal transmission within the effected region. The so called “Adhesive Disease” that occurs after the connective-tissue elements’ overgrowth because of a surgical procedure, can be brought up as an example. The idea of using stem cells for the treatment of related conditions is especially appealing [1], and there is already significant excitement among the general public regarding the potential for stem cell research.

Embryonic Stem Cells – For research and history purposes only - Early stem cell research history, limitations and moral controversy (embryonic stem cell treatment is NOT acceptable to Joseph Christiano and Body Redesigning). There are a great number of scientific papers concerning the development of the methods for use of embryonic stem cells - the pluripotent cells capable of cellular differentiation of almost any phenotype. These cells introduced into a human organism can regenerate the structure of the pathologically altered tissue or a defect that formed within it after some trauma (or a surgery). However, there are reservations regarding this approach: In the ontogenesis, the cellular genetic apparatus undergoes certain changes, and therefore, the introduction of embryonic stem cells into an adult organism may have multiple unpredictable consequences later. One of such negative outcomes can be the asynchronism of embryonic cells with the recipient’s organism. The long-term development cycle of the embryonic cell within an adult organism is unpredictable.

However, regarding pathologically altered tissues research, it is important to point out the presence within every organism of a certain cellular mechanism that enables regenerative and reparative processes in all organs. Because of this mechanism, there are several types of invertebrates capable of a complete regeneration of the entire organism, even with the loss of its significant parts [2, 3, 4]. Some lower vertebrates, especially at the larval stage can regenerate lost extremities or even separate organs [2, 3, 4]. These regenerative abilities are almost lost by warm-blooded animals including mammals, even though the resources for such cellular reparation are present in all tissues of their bodies and are called the Cellular Reserve Section (CRS). In the process of regeneration, the formation of a full set of differentiated cells in tissues occurs via two mechanisms:  First, the stimulation of CRS1 which consists of omnipotent adult stem cells, secondly – CRS2 activation based on the cellular dedifferentiation, followed by their further redifferentiation into the necessary cellular types [2, 3, 4]. It is evident, that the Regulatory Proteins (RP) biologically active in Ultra Low Doses (ULD) can participate in both regeneration mechanisms (Fig. 1).

The omnipotent adult stem cells within CRS1 are capable of asymmetric mitosis which results in formation of two cells. One of these cells remains a stem cell and the other one, moves along the pathway to differentiation and forms the population of so called progenitor cells, which in their turn are capable of further division and differentiation (Fig.1, А) [4]. Thus, the progenitor cells are the source of all cells specific to the tissue. Currently the function of CRS1 is being actively researched on the cellular level by the scientific community: differentiation pathways of progenitor cells are observed, the fate of CRS1 in ontogenesis is studied, etc. However, the nature and pathways of the regulatory signal transmission to CRS1, due to which the division and further differentiation progenitor cells is initiated, have not yet become a focus of a major research effort. The results of our research on the Regulatory Proteins, biologically active in Ultra Low Doses (ULD), have shown that specifically this group of bioregulators participates in information signal transmission to the CRS1.

These experimentally established facts serve as the evidence of this assumption:

It should also be mentioned that the RP of this group are extracellularly localized [9, 12, 13, 14]. These proteins are a part of a Small Matrix - a certain supramolecular structure within the intercellular space that interacts with the extracellular matrix (ECM) and the plasmatic membrane cell (PM) [15]. A Small Matrix being a structure maintains the optimum state of intercellular adhesive interaction, which plays a principal part in the regulation of such major biological processes as the cellular proliferation, differentiation, function of main enzymatic systems within tissues, apoptosis, etc. based on our extensive research, we also believe that the Small Matrix participates in the transmission of information signal to tissues [15]. I this paper, it is our intention to review the mechanism of the Small Matrix participation in the regulatory transduction, particularly, the role of the biologically active Regulatory Proteins in ULD in the CRS function for tissue regeneration.

In constantly renewed tissues there exists a balance between the number of dying cells and that of the restored ones due to the division of neighbor cells or CRS activation [16]. According to our concept the RP of this group are secreted by the cells in case of single cells’ death and that’s why they are present in tissues in the extremely minute quantities.

What happens when a tissue is subjected to negative stimuli that cause mass cells mortality? As a result, we see the destruction of cooperative interactions between the cells in a tissue, structural deformation within extracellular matrix and the development of tissular inflammatory processes due to dendrite accretion. The duration of time intervals necessary for these processes plays the fundamental part in pathway selection for consequential tissue regeneration: either the cicatrix formation or a complete histostructure restoration [2, 3].

The Immune system cells which participate in the acute inflammation phase can have a dual effect on the restorative and reparative processes in tissues. For example, the macrophages which participate in phagocytosis of the tissular dendrite secrete various collagenases that destroy the type 1 collagen in the damaged tissue region and promote epithelial tissues restoration, thereby initiating the regeneration process. At the same time the macrophages promote angiogenesis and secrete TGF-β and PDGF cytokines, stimulating proliferation and migration of fibroblasts, which in turn promotes the formation of a scar tissue [3].

Thus, for the complete regeneration within damaged area, it’s necessary to remove the dead cellular material, stop the inflammation and then control the cell division and differentiation processes, in the way that makes it possible to restore the tissular histostructure without a cicatrix formation. In the last phase of such regulative process there are two major considerations: on one hand, control over proliferation of the connective-tissue elements which aspire to quickly fill the formed defect even by damaging the morphologically normal tissue structure; on the other hand, on the other hand, stimulation of cellular proliferation and differentiation, necessary to achieve the complete histostructure restoration. Usually, especially when the deep tissue layers are damaged, the restorative processes transpire according to the first version described above, where the connective-tissue cicatrix is formed. The second version of a complete tissue structure restoration does not have a chance to occur, because the processes which lead to differentiated cell formation necessary for the restoration of normal histostructure proceed at a much slower pace than the process of cicatrix formation.

When the tissues are damaged (regardless the nature of a damaging agent) the RP secretion is intensified to stimulate the CRS. However, this stimulation can quickly be incapacitated, due to the inflammatory reaction development (the influx of macrophages, leucocytes and a great number of cytokines they produce). This can lead to a halt in the RP hypersecretion and the creation of the CRS informational blockade regarding the tissue damage rate. However, if there is a continuous influx of RP to CRS (for example, via the exogenous infusion of these RP into the organism) the  tissular histostructure within the cicatrix will be in the significant degree restored to the morphology of the normally functioning tissue.

As the result of a long-term research in localization of these RP, it is evident that these proteins are present in the extracellular space of the tissues that define the integrity of the corresponding organ histostructure. For example, the RP obtained from an eye cornea is localized in the extracellular space of epithelia and endothelia, the cornea bordering layers. [13]. The RP obtained from a lens is localized in the extracellular space of the epithelium maintaining the shape and structure of the lens [12]. The RP obtained from the Common Plantain is detected in the extracellular space of the parenchyma cells, the tissue that defines and sustains leaf’s structure [17]. An important observation is the fact that in all cases the RP are localized in the areas of direct surface contact with the neighboring cells, so their localization corresponds completely to the function of adhesion molecules. Consequently, it seems that RP are secreted by the cells in response to the damaging stimuli to maintain the spatial organization of extracellular adhesive interactions which is the main condition for all basic biological processes regulation [18, 19]. It is the common knowledge that the cellular adhesion destruction is the first stage of any pathological process development irrespective of its nature [20, 21]. The preservation of cooperative intercellular connections assures the increase in cellular vitality. As it was specified above one of the mechanisms of tissue regeneration is the cellular dedifferentiation with further redifferentiation into the cellular types necessary for the tissue histostructure restoration. It is seeming that the RP promotes dedifferentiation-redifferentiation process by increasing the cellular vitality (Fig. 1, B)., making the RP the factors, necessary for the complete tissue regeneration.

The RP are the proteins with the low molecular weight which are stable under the wide verity of physical and chemical factors including the changes in temperature within the range of -700С -- +1000С, рН values, the effect of various enzymes etc. [6]. The RP are extracellularly localized and biologically active in ULD.  The RP biological activity is characterized by the presence of tissular and the absence of species specificity, which is also characteristic of other regulatory factors, such as adhesion molecules and cytokines [22, 23].

The RP molecules exhibit the expressed tendency to forming high molecular weight associations and are present within liquid solutions as nanoparticles sized approximately 100nm. In all likeness, these unique properties of the RP including their biological activity in ULD can be attributed to the nano-size state of these protein complexes in the tissular extracellular space.

The results of our research have shown that the nanoparticles in RP solution contain not only proteins, but also carbohydrates and a significant amount of lipids. Lipids and hydrophobic domains are located inside a nanoparticle, while protein hydrophilic domains and carbohydrates are on the surface of these particles. In our opinion this arrangement of nanoparticles stimulates water molecules to form structures necessary for the regulatory signal transduction. 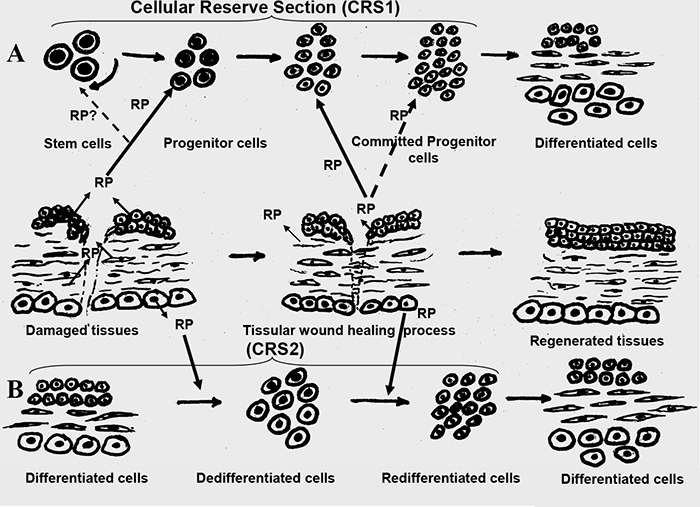 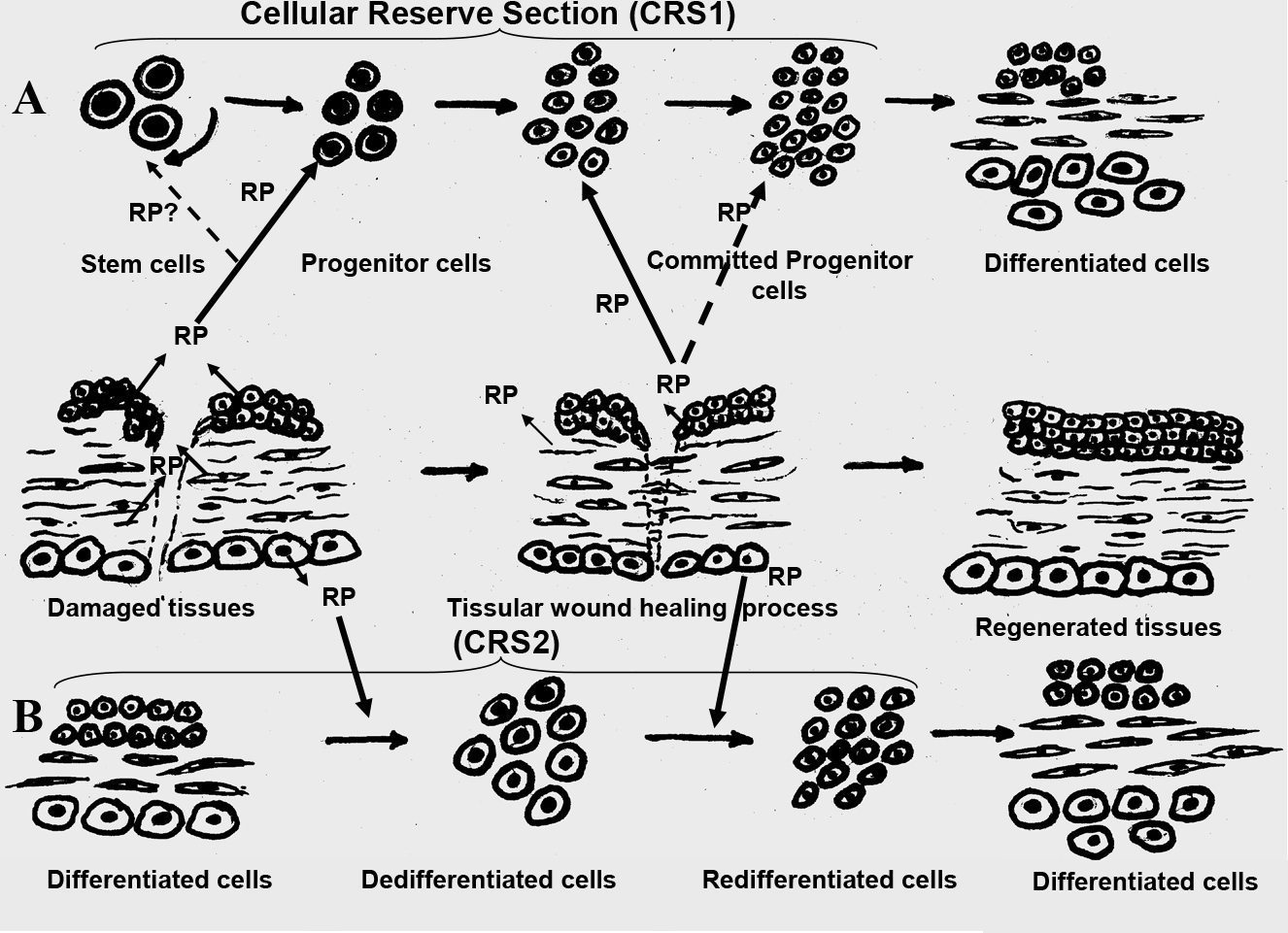 Fig.1. The mechanism of RP’s, biologically active in ULD, effect on the Cellular Reserve Section (CRS) within a tissue.
А – stimulation of multipotent stem cells on CRS1;
B – CRS2 activation based on cellular dedifferentiation and their further redifferentiation into the necessary cellular types.